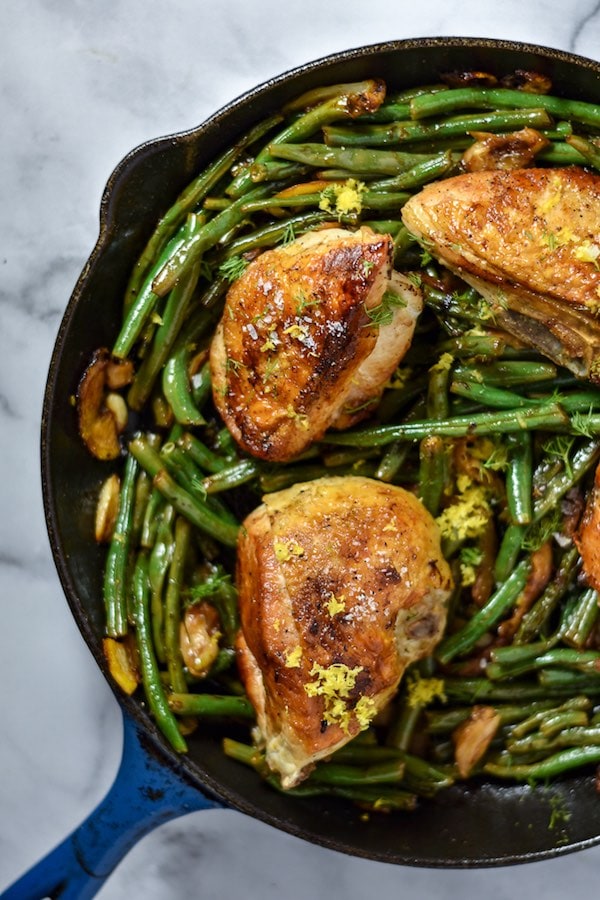 There are only a few ingredients in this recipe (not counting salt, pepper, and oil), but it yields punchy, fierce flavors that leap out of the skillet like a rabbit from a magician’s hat.

Anything tossed in this deeply savory potion will instantly turn delicious. Piles of smashed garlic and sliced lemon absorb the liquid gold and transform into greater versions of themselves.

Bone-in chicken breasts or thighs are placed skin-side down and slowly heated from a cold skillet (a technique I learned from this recipe in Bon Appétit). You don’t need any additional oil. This method gives the fat plenty of time to melt from the chicken while its skin turns glassy and bronze.

I prefer bone-in, skin-on chicken breasts but you can use thighs instead. You’ll be left with an even deeper pool of chicken fat for your vegetables to swim in; a luxury treatment that can gussy-up anything, even if it comes from the ground.

Let the seasons or whatever’s wilting in your refrigerator decide what’s added to the skillet next. Try haricots verts, bunches of curly kale, slices of bell pepper or even a can of beans. Anything can benefit from a lemon-garlic makeover.

I chose green beans because they were firm, bright, and abundant at the farmer’s market. Use whatever vegetable looks good at your local market or grocery store.

The vegetables bathe in the lemon-garlic-chicken skillet until they, too, start to brown and crisp, embracing their inner savory side.

A complete dinner emerges from that skillet; you’ve cut all kinds of corners but no one feels cheated.

I served this with wild rice that I started in my rice cooker before beginning prep. It would also be great with farro, quinoa, or roasted red potatoes.

It doesn’t really need a carb unless you live in a constant state of worry that the people around you might be hungry.

Use this recipe as proof that dinner magic exists. You don’t need a ton of time or ingredients to make something delicious.

Adjust the flavor profile and vegetable add-ons to suite your cravings, then share the trick with your friends. They won’t believe their eyes.

All you need is one skillet and 4 ingredients- chicken, garlic, lemon, and green beans- to make dinner magic.

Season the chicken with salt and pepper. Place skin side down in cold, oven-safe skillet, then turn the heat to medium. Cook, uncovered, until the skin is deeply golden brown, 6-8 minutes. Flip the chicken, transfer the skillet to the oven, and cook another 10-20 minutes depending on how big your cuts of chicken are. Chicken is done when it reaches an internal temp of 155-160 degrees.

Using tongs, transfer chicken to a plate to rest, leaving all the fat behind. Add 1 tablespoon of olive oil to the skillet and heat on low. Add the lemon and garlic and cook, stirring occasionally, until the garlic has started to caramelize and brown, 5 minutes.

Add the green beans, season them with plenty of salt (at least 1 teaspoon) and pepper and toss with the lemon/garlic oil. Cover the skillet and cook on medium low for 5 minutes. Uncover, toss once, and cook an additional 5 minutes until tender and golden brown on one side.

Return the chicken to the skillet if it needs to be reheated. Serve chicken with the green beans and finish with an extra drizzle of olive oil, a pinch of flaky sea salt, a few turns of black pepper, and a squeeze of fresh lemon if desired.

Buy the smallest bone-in, skin-on chicken breasts you can find. They will cook more quickly and evenly. An easy, straightforward dinner calls for a simple weeknight wine. Try a soft, lemony white like an unoaked Chardonnay, Sancerre or Sauvignon Blanc. If you'd prefer a red, try something with good acidity like Valpolicella, or go for a contrast with tannic Chianti. 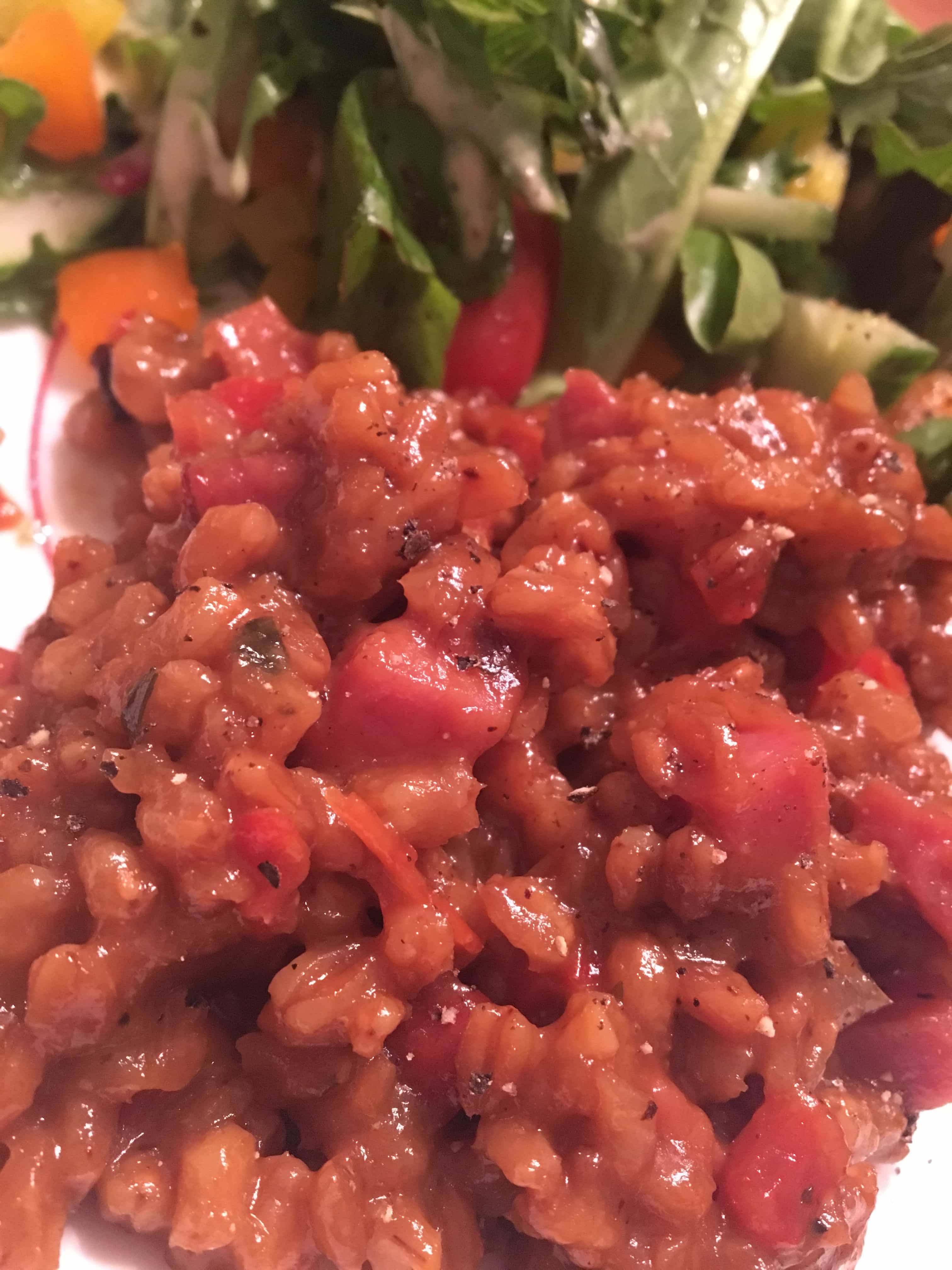 Farro “Risotto” with Ham and Squash 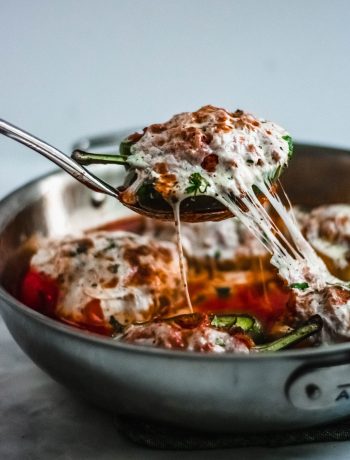 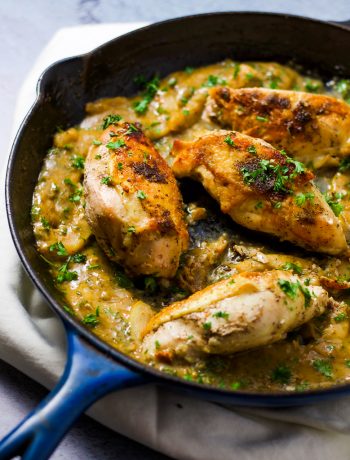