My first memory of chicken pot pie is from third grade and all I can remember is: mushy carrots.

Spoonful after spoonful of soft orange bits lodged in a gloppy white sauce. Sitting at my friend’s dinner table, wondering whether or not this was the type of food you’re supposed to chew.

Although my first experience with chicken pot pie was slightly traumatic, the dish has intrigued me ever since.

Chicken and vegetables steeped in a flavorful sauce, hidden under a gilded layer of pie dough, sounds like an exquisite meal.

I set out to make chicken pot pie without the thick white sauce, the soggy bottom crust, and definitely without carrots.

In fact, I changed the flavor profile entirely and decided I couldn’t really call this recipe “Chicken Pot Pie.”

It has the same ingredients as Coq Au Vin– a French dish made with red-wine braised chicken, lardons, mushrooms, garlic, and fresh herbs. My version bakes in a cast iron skillet or pie dish, topped with a butter-strewn crust.

It starts with bacon.

The bacon cooks until it’s crispy and leaves a glossy layer of rendered fat in the pot. Mushrooms, onions, and garlic are added to swim in the savory pool of pork fat as they turn golden brown. Chicken, wine, stock, and a hint of Cognac go in next, along with some flour to create a rich sauce.

That’s your filling, and you will be tempted to eat it right out of the pot.

You might even take four tastes too many and not have enough to fill your pie dish. I’m not going to discourage that, but I would suggest a bit of patience.

There’s a flaky crust on the horizon.

After you’ve transferred your filling into a 9-inch skillet or pie dish, top it with a butter-streaked puff pastry or pie dough and bake until the bronze crust glows like Odysseus prepared for battle.

Dig into the pot pie with a big spoon and serve it in bowls, topped with fresh parsley. Add a dollop of crème fraiche if you’re really feeling like a Greek god.

The creamy tang of crème fraiche against the savory richness of the pie is a stupid-good combination that I wish I didn’t know about.

And for the carrots?

It’s the time of year for hot, comforting foods that last in your refrigerator all week as you chip away at leftovers. It’s time to spend a bit more effort in the kitchen because it’s too cold to do anything else.

As for the carrots, I suppose winter is the time of year for them, too.

Here’s an idea: roast whole carrots alongside the pot pie, doused in plenty of olive oil, salt, and pepper. The two should be ready at about the same time, and will taste wonderful next to the pot pie.

Preheat the oven to 400F. Cook bacon over medium heat in 9-inch, oven-safe skillet (such as cast iron) or a heavy pot, tossing occasionally, until fat renders and bacon is crisp, 8-10 minutes. Using a slotted spoon, transfer to a medium bowl, reserving the fat in the pan. Add mushrooms to the pot and cook until lightly golden-brown, 6-8 minutes. Transfer to the bowl with the bacon. Add a drizzle of olive oil to the pan if it seems dry, then add the onion and garlic and cook on medium-low heat for about 3-5, until the onion is softened. Transfer onion mixture to the bowl with the bacon/mushrooms.

Meanwhile, in a large bowl, mix together the flour, thyme, bay leaf, salt and pepper. Add chicken pieces and toss well to coat.

In the now-empty pan, add olive oil and heat over medium. Add chicken pieces and any flour that remains in the bowl. Cook, stirring occasionally, until chicken pieces are golden and cooked through, 10-12 minutes. If the pan starts to get dry, pour in a bit of the 1 cup of wine or water/chicken broth. Return mushroom/bacon mixture to skillet, then pour in all of the wine, water or chicken broth, and cognac or brandy. Scrape bottom of skillet, and let simmer about 10 minutes, until thickened. Add more flour if the mixture isn't thickened to your liking. Taste for salt and adjust the seasonings. Turn off heat and stir in parsley. Discard bay leaf and, if you're not already cooking with an oven-safe, 9-inch skillet, transfer the pot pie filling to a 9-inch pie dish.

On a lightly floured surface, roll out the puff pastry to fit your skillet or pie dish with at least a 1-inch overhang. Drape puff pastry over filling, fold the edge under itself and crimp the edges with a fork, if you'd like. Brush the top and sides with the heavy cream or beaten egg. Cut 5-6 small slits in the center so steam can escape. Place on a baking sheet to catch any overflow before transferring to oven.

Bake until the crust is browned and filling is bubbling, 25-30 minutes. Let cool slightly, at least 10 minutes, before serving. If desired, garnish each serving with parsley.

Draping puff pastry or pie dough directly over a steaming pot pie filling will result in a less-than-crisp, but still absolutely delicious, top crust. I found that the loss in quality was worth the improvement in ease, but if you've got the time I would suggest making the filling the day before or chilling it first, then draping the pie dough over and baking. Serve this with the wine you're putting in it! Preferably a hearty red wine like an (inexpensive) red burgundy. 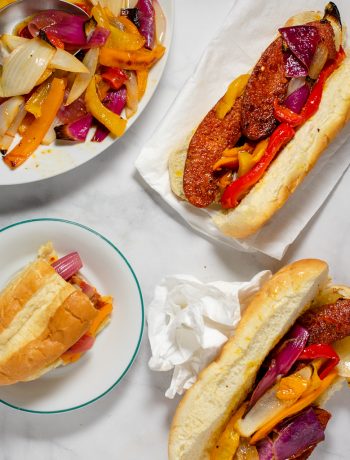 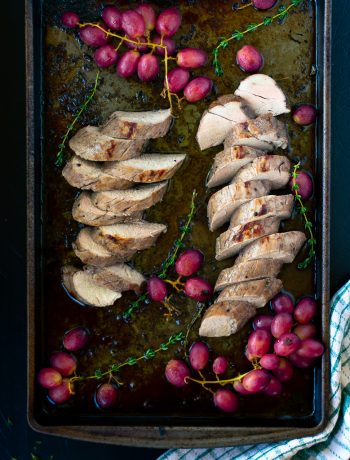 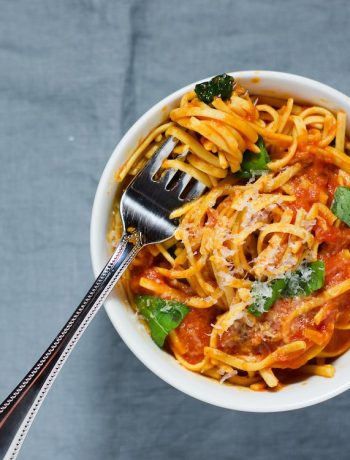